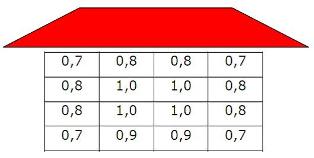 The experiences from many countries show that such coefficients are defined differently in different countries. E.g. in Germany they are currently hardly ever used, but in Poland they are extremely frequent. The method for the defining of the corrective coefficient is based on the comparative analysis of the actual heat requirement coefficient calculated on the basis of the central heating project. This has been worked out at the Scientific Research Centre for Installation Systems INSTAL (Germany). And we have two options here:

A. The heat requirement has been defined on the basis of the preliminary central heating project. This means that a preliminary central heating installation project is developed. Thereat it must be taken into account that the planners have probably been guided by the obligatory legal acts in force at the time, without taking into account the future modernisation. The corrective coefficient is defined on the basis of the warmest apartment, which coefficient shall be defined as 1.0. In case of this method, which is more accurate than the simple use of a table, makes data difficult to process at times, since not all building managers have not preserved the house projects, especially when they have been built a long time ago. It should be further pointed out that during that time the inhabitants may have replaced the radiators, and may have installed radiators that do not always satisfy the heat requirements of the specific apartment. And finally, the building may be restored, which also affects its comfortable heating.